You Can’t Beat The Umpires 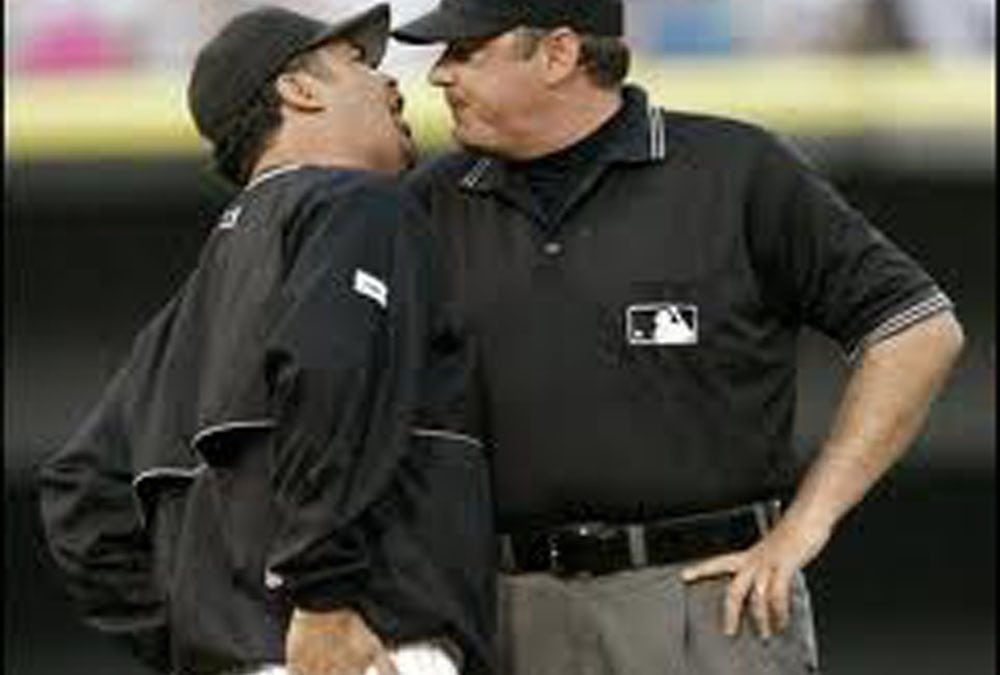 Recently, a participant in one of my leadership programs shared her experience of being moved around within her organization over the past six months against her wishes.

She was told it had nothing to do with performance, and in fact her reviews were stellar. She explained that the company felt it was in its best interests to have her in a different role and in another location. After I heard the entire story, I thought the company’s decision made sense.

During our coaching conversation, she told me how frustrating the past few months had been for her. She really felt as though she was making strides as a leader in the organization, and even though she understood the company’s reasoning, this move caused her to feel as if she was starting all over again.

In the leadership session with her group, I did a short piece on Organizational Change and how it impacts all of us in different ways. I likened “change” to the stages of grief, because if you really think about it, when change happens, it’s an ending.

Just like the stages of grief, when something ends there is a period of anger and denial, and then we slowly move to the next phase, where we resist and find ourselves longing for the past. I call this the nostalgic phase because I’ve noticed that after a change, many people talk about “how great things used to be.”

What’s interesting is that before the change, many of the same people were complaining about how things were. I guess that’s part of being human – initially, change makes whatever we had look really good, even though when we had it we thought it could be a lot better.

After our resistance during the nostalgic phase, we move towards the apathetic or neutral phase. We aren’t very excited about the change. We don’t really long for the past. We can take it or leave it.

Then, we usually move toward the acceptance phase. While we still have some doubt, we are beginning to stick our toes in the water and get a feel of what the new normal will be. It’s here we start telling ourselves that we may be okay and can move forward.

Finally, after we complete these phases, we move to the last phase and are committed and excited about the new normal. Here we start thinking about and exploring all the possibilities the change can bring about for us.

As leaders, we want to get to the committed and excited phase as quickly as possible.

What I talk about in my session is that all of us, including our teams, will go through these stages during any change. Our team will look to its leaders to decide how fast they, the team, will progress. They will follow our, the leaders’, pace. That means if we are struggling to get past any of the stages, well, our team is going to fight it as well. Until we as leaders get to the end point, we can’t expect our teams to get there.

In our conversation, she told me how much she was struggling with the anger and denial phase in her new role in the company, and she realized that she needed to quit fighting it. It’s here that she shared with me an insightful Quarter Turn.

Her son has played baseball for many years, and is an accomplished pitcher. Like many athletes, he would get very upset when he felt the umpires made a bad call, or a call that didn’t go his way. She told me that her advice to him was, “You can’t beat the umpires.”

To me, this just means that arguing with those who are responsible for setting the rules of the game is an exercise in futility. You have no control over how the rules are interpreted by others, so the best course is to focus on what you can control.

She then told me that when her teenage son saw her coming home night after night, complaining about her new role in the company and how it wasn’t fair, he gave her a solid piece of coaching – “Hey Mom, you can’t beat the umpires.”

It was then she realized he was absolutely right. She had been arguing against the rules of the game, which she has no control over. Instead of focusing on what she has control over, she was choosing to waste time and energy focusing on changes and events she had no control over

It was also in this moment that she teared up a bit because not only had she decided to move on and embrace the change in her life, she realized she had done a pretty good job in raising her son.

What changes have I experienced over the past few months?

Which stage am I in handling these changes?

Am I stuck, and if so, what am I going to do about it?

Am I focusing on what I have control over, or am I still hoping to beat the umpires and re-write the rules?

When we are no longer able to change a situation- we are challenged to change ourselves -Victor E. Frankl

If you don’t like something, change it. If you can’t change it, change your attitude. -Maya Angelou

For the past 33 years, I have looked in the mirror every morning and asked myself: ‘If today were the last day of my life, would I want to do what I am about to do today?’ And whevever the answer has been ‘No’ for too many days in a row. I know I need to change something. -Steve Jobs

If you do not change direction, you may end up where are heading. -Lao Tzu

People are very open-minded about new things, as long as they’re exactly like the old ones. –Charles F. Kettering