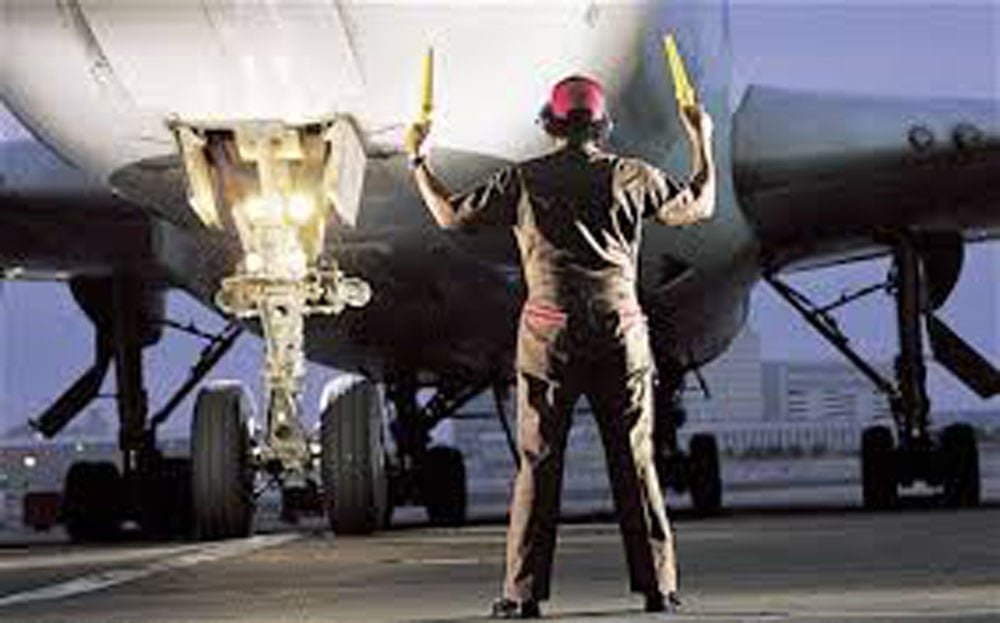 Recently, after a long flight back from the west coast, I awoke from my “plane sleep” as the aircraft touched down. Looking at my watch, I was pleasantly surprised to see it was about 12:45 a.m., almost 40 minutes ahead of schedule. As any frequent traveler knows, arriving early these days can be both a blessing and a curse, mostly because staff reductions at airports often mean unattended gates for early flights. Many times the minutes made up in the air are given back waiting for ground crews to get into position.

Despite my doubt that I’d reap the benefits of our early arrival and get home to my warm bed for a good night’s sleep ahead of schedule, I began my end of flight ritual, packing up my reading materials, headphones and anything else I needed to exit the aircraft in an orderly manner.

My hopes grew as we taxied to our gate. My heart sank as we stopped just a bit short of our final resting position. It was then that I heard the inevitable – the overhead speaker projecting the Captain’s voice, and I knew full well what was coming next.

It was his delivery of the message that has stuck with me these past few weeks.

“Ladies and gentlemen, this is the Captain. I have good news and bad news.” These are the words you almost never want to hear when traveling.

“The good news is that we have flown this newly built, multi-million dollar aircraft, with precision accuracy all the way across the country, avoided weather fronts, caught a tail-wind, saved fuel and arrived at our destination 30 minutes ahead of schedule! Unfortunately, the bad news is we now have to wait for a man with a three-dollar flashlight to drive the last 25 feet to our gate.”

I gave a slight chuckle to that statement, and just like most Quarter Turns that come to me, I began to visualize the three-dollar flashlight in a different manner.

Think about your business and all of the modern technology you utilize to complete just about every function. Think about all of the amazing productivity tools we now have at our disposal to save money, time, effort and energy. Think of all the innovation that just ten years ago would have been almost unheard of, or been fodder for science fiction movies.

Now, think about all the three-dollar flashlights you are still using in the middle of it. Why? Because that’s the way you’ve always done it!

Think about it. Someone at the airport has a job description that includes making sure there are plenty of flashlights available, along with a generous supply of batteries. I can’t help but wonder if they ever have to run up to the store in the airport and pay twice the price for them! And, maybe that’s why we have to wait sometimes!

I started thinking about all of the three-dollar flashlights in my own business. For example, manually entering expenses into QuickBooks or Excel. Managing a mailing list or database. Creating invoices and proposals from scratch. Using travel websites that do not properly save credit card info so I need to manually re-enter it again and again.

All of these activities and so many more eat into my available time, and take me and my team away from highly productive activity that can mean the difference between success and failure, making the quarter or missing it, and closing that prospect or losing them.

So, where are the three-dollar flashlights in your business?

What are you doing in a non-dollar productive way because that’s the way you’ve always done it?

mobile.the-best-casinos-online.info throughout the campaign while 48% greater revenue was accomplished per click without resorting to discounting. sans-serif;”>“The way we’ve always done it” is the biggest killer of innovation in the new normal of business.

Later on I discussed this Quarter Turn with my friend and colleague, Rob. He liked my analysis, and quickly added that even though I felt the three-dollar flashlight was redundant, obsolete and a symbol of the way we’ve always done it, without that man and his flashlight, my multi-million dollar aircraft, with all its state of the art technology, would have remained 25 feet from its final destination for a long time! In other words, that person with the three-dollar flashlight was a very important person, along with the pilots and crew, the maintenance technicians, and everyone else connected with making my flight work.

This created another Quarter Turn that hadn’t even occurred to me. Where in our lives and our businesses are we overlooking the seemingly menial tasks that haven’t yet been replaced by modern technology, and under-appreciating the people who perform them? Who are we dismissing as less than important, when if we really think about it clearly, this person is actually integral to the entire operation?

Maybe it’s the custodian. Think about how long it would take before you noticed that no one emptied the trash in the cafeteria or break room. My bet is it would be a day or two at most. Do we notice how nice it is when the trash is emptied every day so we can fill it back up, and thank the custodian, or do we take that for granted?

Maybe it’s the person who drives your taxi or shuttle safely to the hotel. We tend to respect pilots for the work they do getting us somewhere safe. Do we have that same respect for the drivers? That question becomes particularly interesting when we realize that more people are injured or killed in traffic accidents than in airplane crashes. Even if we have that same respect for those drivers, do we show it by how we treat them?

Have we bothered to thank everyone lately for their roles in the success of the mission? Sometimes all the innovation and technology of the modern world still isn’t good enough to replace the three-dollar flashlight!

“The stone age didn’t end because they ran out of stones.” – Unknown

“Everyone who’s ever taken a shower has had an idea. It’s the person who gets out of the shower, dries off and does something about it who makes a difference.” — Nolan Bushnell

“It seems to be one of the paradoxes of creativity that in order to think originally, we must familiarize ourselves with the ideas of others.” — George Kneller

“Do not fear to be eccentric in opinion, for every opinion now accepted was once eccentric.” — Bertrand Russell

“A man may die, nations may rise and fall, but an idea lives on.” — John F. Kennedy

“Truly creative people care a little about what they have done, and a lot about what they are doing. Their driving focus is the life force that surges in them now.” — Alan Cohen

Looking forward to our next conversation.