Sports or No Sports 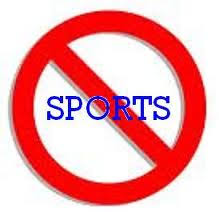 Like many people I was so looking forward to the annual March Madness College Basketball Tournament last month and like many, was extremely sad it needed to be cancelled. Just like every other sporting event over the past month, basketball seems like a small sacrifice in order to keep us healthy and ultimately save lives.

As we enter into a new phase of our stay home and stay safe initiatives, I’ve found myself watching classic sports. This is something I’ve never really done before, except maybe to catch a few key moments of my favorite Michigan football and basketball games over the past few decades.

I’ve learned that many others have found themselves watching old games as well. Why? It’s seems strange that we find a deep seeded need to watch old replays of past games or matches in any sport, especially when so many are occupied with much greater challenges.

As I’ve been watching other forms of entertainment these past weeks I’ve come to a conclusion- there really isn’t that much on TV that I care to watch. Yes, there are a few programs that I’ve found oddly entertaining (Hail to the Tiger King) and some movies I’ll re-watch again and again, (Yo Adrian!) and the news channels I can only handle in small doses. At least we’ve been given a reprieve from the non-stop political ads.

I’ve concluded that during normal times the reason I tend to gravitate towards live sporting events is the thrill of watching something where the outcome is unknown, and being ok with that unknown.

I’ve also realized that I just seem to like having a game on the TV when I’m relaxing and doing things around the house. I don’t even need to have any stake in either team or the sport for that matter. For some reason it just makes me feel a bit better. And feeling a bit better is something everyone could use right about now.

Live sports, I’ve found, is the comfort food of entertainment. And who doesn’t love comfort food. I think about how many times I’ve engaged in such important family and life events with a game on in the background.

My dad and I have gone to the Ohio High School basketball tournaments since I was 10 years old. When we aren’t at actual live games the College Basketball tournament was always on the TV at the hotel or the restaurant. I couldn’t tell you a thing about any of those games, but I can remember everything about the conversations we had during them. Just me and my dad, talking about a ballgame, talking about life.

Every fall when I carved pumpkins with my two sons, the Major League Baseball Playoffs were always on in the background- don’t remember those games either, but sure remember the smell of those pumpkins and pumpkin seeds cooking in the oven. The excitement on the boys faces when we turned off the lights and placed a fresh new candle into the Jack-O-Lanterns.

Thanksgiving Day, and the smell of Turkey, with the Detroit Lions losing a game they should probably win in their annual fashion. No need to watch that game either, but sure liked having it on. The game wasn’t important, but the time with my family is cherished.

Opening day in Baseball and the Masters at Augusta marking the end of the winter. Pro Basketball and Hockey’s Stanley Cup marking the conclusion of another school year and the beginning of summer. Wimbleton Tennis or Soccer’s World Cup over the 4th of July certifying that summer is in full swing.

Whether you are an avid sports fan, or don’t understand the difference between a touchdown and a first down, it doesn’t really matter. Sports has had some sort of impact on your life. Sports, at least in this country, really do matter. In fact they probably matter too much, but that’s an entirely different article for an entirely different time.

This leads me back to my original question, as there is talk of getting teams and players together at one location to start playing live televised games again without any fans or audience other than those required to put on the event.

My vote begins with asking – is it safe for the players and those involved? If it is then My vote is a resounding yes. Right now more than ever, sports matter. Not because we need to crown a champion for any particular league or event. Not to prove that some team or individual can score more than another, or shoot the lowest round on the golf course, or drive their car around a track faster than someone else. That’s probably the least important reason for these sports, at least right now.

Sports are needed right now because we are all starving for a little bit of comfort in our lives today. We are looking for an opportunity to be invested in something where the outcome is uncertain, but we are actually ok with the uncertainty. Right now, more than ever before our world needs a distraction and a reason to stay home that isn’t so frightening. So that those brave individuals on the front lines fighting this war against a formable enemy can be left to do their jobs without being distracted by the rest of us.

And also when these brave men and women finally get to rest at the end of their long days, that they have a bit of comfort food to watch on TV as well.

Sports or No Sports

If they can make it safe and the players want to, then I say yes! What’s your vote?

Cheers to your success, your growth and most of all your health