Nobody Roots for Goliath 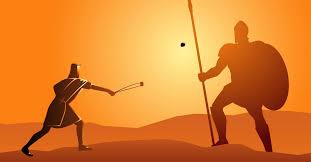 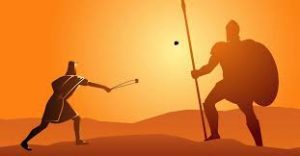 When I was a boy my dad- Fuzz as some of you know him- and I watched a lot of sports together. Before I was even 10 years old, I recognized that certain teams always seemed to win. I also noticed that when people spoke about these winning teams, many of their comments weren’t very positive and in fact most of the talk about these winning teams was extremely negative. When I asked my dad why so many seemed to dislike these teams that just won all the time, he looked at me and simply said “Nobody Roots for Goliath”

We’ve all heard the old biblical tale about the young boy that flung his stone and slew the unbeatable giant known as Goliath. And deep down, especially in the world of sports, many of us root for the underdog to beat the unbeatable foe. It’s what Hollywood movies are based upon- Rocky, Miracle, even Rudy have us cheering for the unlikely victory against all the odds.

Then there is Tom Brady…

At 43 years old, playing in his 10th Superbowl and the holder of just about every post season record in the NFL. He is the ultimate Goliath in the sports world and just like Goliath, it seems that nobody ever roots for him. Why is that?

I will leave those arguments and the validity of them up to you. One thing for certain though, is just like when I was a kid, many people this Sunday will most certainly be rooting against him and his standing as Goliath.

My interest in Tom Brady isn’t whether you love him, hate him, root for him or against him, but rather what he brings to his organization as a Leader. I’m not even going to discuss the leadership ability he displayed over his 19 years as a New England Patriot which is an entirely different topic. Let’s just focus on what he’s demonstrated in less than 1 year with his new organization- the Tampa Bay Bucs. The impact he’s had on a franchise the seemed destined for eternal mediocrity cannot be understated.

Take a good hard look at the organization he became a part of less than 12 months ago. Tampa Bay was a team that like most in the NFL seemingly had a lot of talent, but they just weren’t very good. A perennial losing franchise, irrelevant for the past 12 years and coming off yet another disappointing season in 2019 with a losing record of 7-9, placing them squarely in the middle of the pack.

If you check the roster of the Tampa Bay Bucs, it basically looks almost identical this season at it did last season- and even the season before that. Basically, they have the same offensive line, the same receivers, same starting tight end, half the defensive line, and two of the defensive backs- all the same.

Yes, they made a few key additions but so did just about every other team in the league.  Obviously, the most impactful change from last season to this season was the addition of Tom Brady, but his talent isn’t the only thing he brought with him to his new organization. And let’s be honest, at 43 his athletic talent isn’t what it used to be and there are clearly much better athletes playing quarterback in the NFL today, including the one he’s up against on Sunday.

Brady brought with him something that much more intangible and harder to quantify…a winning attitude. This new attitude permeated the entire culture and wasn’t about individual achievement and statistics, but rather about winning and more importantly what it takes to win as a team.

It’s no secret that Brady’s work ethic and preparation is legendary, but Tom Brady added something called Accountability and a high level of Expectations that ultimately translated to daily actions and behaviors in the organization. Everyone from players, and coaches, to trainers, and even the maintenance personnel knew if they didn’t hold up their end of the bargain, they would hear about it. Culture is Caught- not Taught

One of the Tampa Bay wide receivers shared a story that first day he was scheduled to practice with Brady he couldn’t sleep the entire night before. He went through all the receiving routes in his mind over and over again all night long because he wanted to prove to Brady he was up to the challenge. This sort of extra mental preparation spread quickly through the entire organization and fellow team members stopped doing the bare minimum that’s required of a professional athlete, but started staying late in the film rooms, spending time doing extra reps in the weight room and on the practice field, focusing on the little things that have a big impact. You know- those Quarter Turns 

It’s not an accident that Tampa Bay went from an undisciplined outfit and one of the most penalized teams in the league last season, to one of the least penalized this season. Last year Tampa posted an NFL high 41 turnovers this season they are in the top 5 for least amount give aways in the league. Same players- different attitude- Same ability- higher expectations- Same talent level, different results.

Talent is important, but talent only gets you to the playing field. The world is littered with talented individuals sitting on the sidelines wondering why they aren’t achieving at the highest levels or worse blaming others for their situation. The Great Ones, “The Goliaths” take ownership and not just when they are winning but when they are losing.

No one cares about leadership when you are winning, and as a leader in your own organization your #1 job is to illuminate that goal, communicate that goal, and demonstrate the behaviors necessary to achieve the goal. That’s what being a Goliath really means.

Sports organizations have it much easier in that they always know the goal and there is no secret as to what it actually is. Win the Game, Win the League, Win the Championship. But in our businesses and in our lives, the goals become unclear, and people lose focus on what’s important. That’s where leadership can fill in the void, or on the other end make that void even larger.

Win or lose the game on Sunday, Tom Brady has made an impact on his new organization and more importantly has demonstrated that leadership matters, focus matters, preparation matters, buy-in from those around you matters. Ultimately he’s proven that changing a culture can happen very quickly with effective leadership and an organization committed to the same goals from top to bottom.

So whether you find yourself rooting for or against Goliath on Sunday, know that to become the the best, to become a Goliath in anything takes a lot of sweat and sacrifice and certainly isn’t an accident but the result of years of struggle and preparation. Know that if you ever are fortunate enough to become Goliath your work has just begun as there are plenty of David’s out there ready to sling their stone and knock you down.

I for one will probably find myself rooting for Goliath this weekend because a 20-year run of excellence in any endeavor is something to be appreciated.

Ask yourself this week if you have what is takes to become Goliath in your organization.

Check Under the Hood
Qualities of Exceptional Leaders