Ask For What You Want 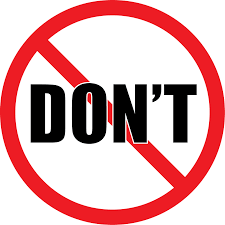 It would take a patient and understanding server to hang in there while that guest continued to work through everything they didn’t want.

Even though we can see the negativity and ineffectiveness in this example, people often use a “what I don’t want” approach when thinking about and describing what they really do want.

Listen for how often you hear that in your life – at work or at home or among your friends or out in the community – and listen for, perhaps, how often you use this approach yourself.

I had that habit, without realizing it and probably for years and years. Until one day during a training session, a great facilitator looked and me and respectfully asked, “Do you have any idea how often you say ‘don’t’?”

Don’t forget, don’t be late, don’t interrupt, don’t get lost, don’t do this, don’t do that and on and on.

There are a few reasons to use an alternative approach, the positive approach. One is that our brains respond and serve us better when we think and speak in positive terms rather than in negative terms. Just to process the “do not,” the brain needs to contemplate what we seek to avoid, and that gets it focused on the wrong thing.

Consider this – right now, whatever you do, please do not think of the number 24.

What did you just think of? 24. Your brain had to think of it to understand the request. And now, 24 is in there. The guidance you gave your brain included what you wanted to avoid.

I got the opposite of what I asked for by framing my request in a negative way.

Related to this idea is some more baggage that comes with telling people what not to do – it can sound authoritarian. People want to do things rather than not do things. Throughout our lives, we encounter others who are, or we perceive to be, “in our way,” telling us what we can’t do. That background can prompt resistance from those you seek to help through your guidance and coaching. If someone perceives you as an overbearing, burdensome obstacle, they are less likely to see you as a helpful coach, mentor and/or leader.

And that leads to another problem with taking a negative approach to providing guidance. An essential role of a coach and leader is to help people get clarity about what to do. Good coaches and leaders help others get clear and specific in their thinking and action.

“Don’t” statements at best only eliminate some course of action. They fail to provide any specific guidance about what to do. There is no clarity on what to do, just the absence of something. They leave an enormous void.

That became very apparent to me recently when I was coaching someone, helping them work through a challenging conversation they had. They were not happy with how they handled themselves and the results they achieved. As they described what happened and why they were disappointed with themselves, they expressed frustration and said, “I don’t want to be accusatory or argumentative towards that person.”

At that point I congratulated them on that insight, and then asked, “So, what do you want?

I prompted them to think more about what they really wanted, and in short order they landed on some very positive objectives. “I want to be helpful and cooperative.”

Now they had something positive to work towards and their brain had a clear mission – be helpful and cooperative.

“Don’t interrupt” can be stated as “let the other person finish.”

“Don’t get lost” works better as “stay on course.”

Changing my “don’t” habit has been a challenge for me. I still find myself thinking and speaking in terms of “don’t” rather than “do,” at least initially. I’m okay with that as a starting point. I think it can be a helpful starting point.

To get where I want to go, I’ve developed the practice of following it up right away with thinking about what I do want. If I say something as a “don’t” statement initially, I simply say to myself, and often times aloud to the person I’m speaking with, “Let me say that better,” and then I reframe it as a positive “do” type statement. Thinking and speaking in positive terms is fun and upbeat.

Ask for what you want. Frame your thinking, speaking and guidance in positive terms.

Now that’s something to do.

Rob Otte is a teacher, speaker, writer and coach. He is the Director of Corporate Training and Development for Roehl Transport, Inc. in Marshfield, Wisconsin. Roehl Transport is a freight transportation and logistics company employing 2,500 people. You may contact Rob at otte.rob@gmail.com.

Thought for the week:

When you know what you want and you want it bad enough, you’ll find a way to get it. –Jim Rohn

If you don’t ask then the answer is always no. –Unknown

The distance between what you want and what you get is what you do. –Unknown

Do what you have to do, until you can do what you want to do. –Oprah Winfrey

Listen, smile, agree and then do whatever you were gonna do anyway. –Robert Downey Jr.