It’s Not Rocket Science…Or Is It? 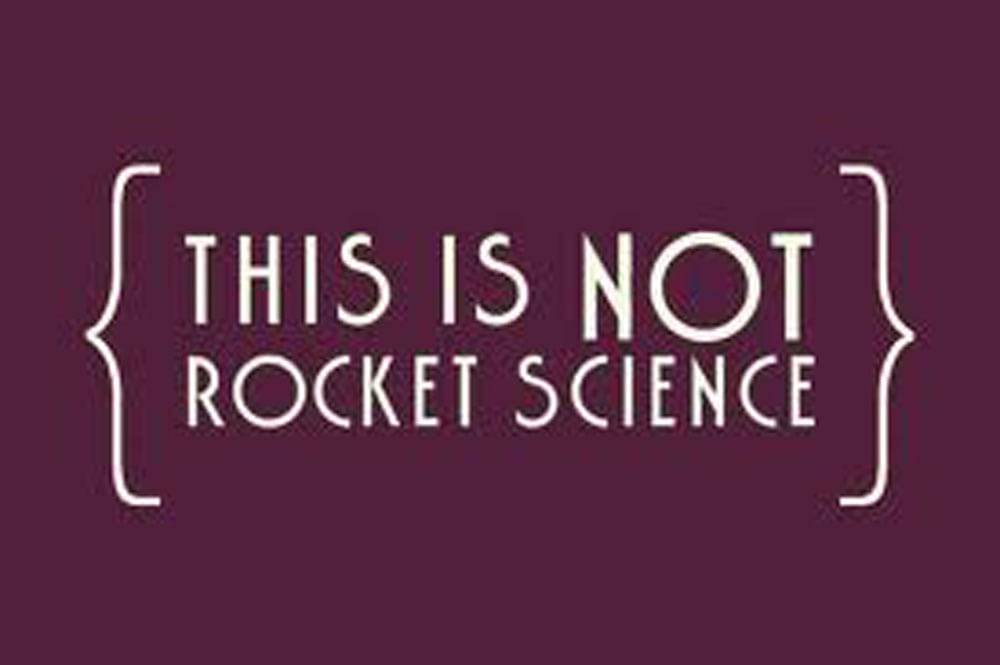 My sister and brother-in-law visited us from Florida this past weekend to celebrate a family event. We only get to see them a few times a year so it’s always nice when they’re in town. My brother-in-law is a highly intelligent engineer who worked for many years with NASA on the space shuttle program. So yes, when you speak with him about his career it actually is “rocket science!” He recently published a book chronicling his years with the space shuttle program called “The Ripple Effect.”

With that high IQ comes many unique quirks and eccentricities. Like that movie “Forrest Gump,” my brother-in-law Andy is a lot like a box of chocolates – you just never know what you’re going to get that day!

As part of our time together, we took them out to a local restaurant. We placed our orders without much fanfare, until it came to Andy.

Here’s what Andy said to our waitress: “I have no known allergies, and my favorite food is groceries, so whatever you think I should eat tonight will be fine with me!”

Our waitress gave him a strange look, a look I’ve seen many times after Andy makes these types of statements. Once she realized he was quite serious with his request, she smiled and went about placing our orders.

Now, I’m sure many of you, just like myself, have asked your waiter or waitress for a recommendation, and you probably even went with a suggestion they made. I would also venture, though, that you put some parameters around what you were willing to eat, or perhaps helped them out by answering a few questions about things you like or may be in the mood for.

Andy’s trust in the waitress was not qualified like that at all. His trust was without limits. He had 100% complete trust and confidence that this complete stranger would make a good decision for him based on her knowledge of the menu, her assessment of Andy and her desire to reach a successful outcome.

She ended up bringing him the only Thai dish on the menu, which happened to be one of her favorites. Based on his adventuresome spirit she thought he might really enjoy it, and he did!

The next day I asked Andy about his leadership style during the NASA years, as he had led a team of brilliant young scientists and engineers. He said he felt it was his job to essentially manage himself into obsolescence. By empowering his team to make decisions, create solutions and execute those plans he felt he would give his team the best chance to be successful, especially under the stressful circumstances of their roles in the space shuttle program, where every decision could mean life or death with the crew of astronauts.

He believed his role as a leader was to help create the vision and think strategically about how his group fit into the overall objectives of the program, and really to be the safety net and make sure nothing slipped through the cracks.

So, given how my brain works I started to process this and how it relates to the leaders and organizations that I work with.

Think about all the amazing talent you’ve assembled in your own organization and your own teams.

When was the last time you completely trusted them to make a decision, not just a little one, but one that would really impact you and the organization? Have you ever handed over total authority to anyone to make a judgment call without your own bias and input, or when you haven’t made your desires known? Would you ever even consider that?

The true role of a leader, really, is to manage themselves into obsolescence.

“But,” you may wonder, “if I actually do that then I won’t be needed.”

Guess what? That’s not how it works in the real world.

We don’t get rid of leaders who help others succeed at levels they themselves never thought possible. We don’t pink slip leaders who instill a sense of empowerment and confidence in their teams.

There is always a place in our organizations for those types of individuals. For those leaders who help others succeed. Leaders who empower their teams and organizations to earn a mission patch by reaching the stars under their own power.

Things to think about this week:

Do you trust your team – really trust them – to make good decisions?

How are you performing your role to support your team on their journey rather than take over the controls and turn them into passengers?

What type of leader do you want to follow? One who calls all the shots, makes all the decisions, and relegates you to someone who performs tasks? If that answer is no, what makes you think those you lead are any different from you when it come to this?

How are you helping your team soar to new heights, new places your organization hasn’t been before? It’s a big universe out there. Help your crew explore it by helping them off the launch pad.

Do you think you’re really serving the organization by behaving in a way that you think makes you essential? What happens to the success of the mission when you’re gone?